Home » MAKING MONEY FROM HOME » Smartphone Apps (Earn and Save Money) » Mobee App Pays You to Mystery Shop [from you phone!]

Last Updated on May 2, 2018 by Kelly L. This post may contain affiliate links. Regardless, I only recommend sites I've researched and/or used and trust.

“Mobee App Review: How to get paid for mystery shopping right from your smartphone!” 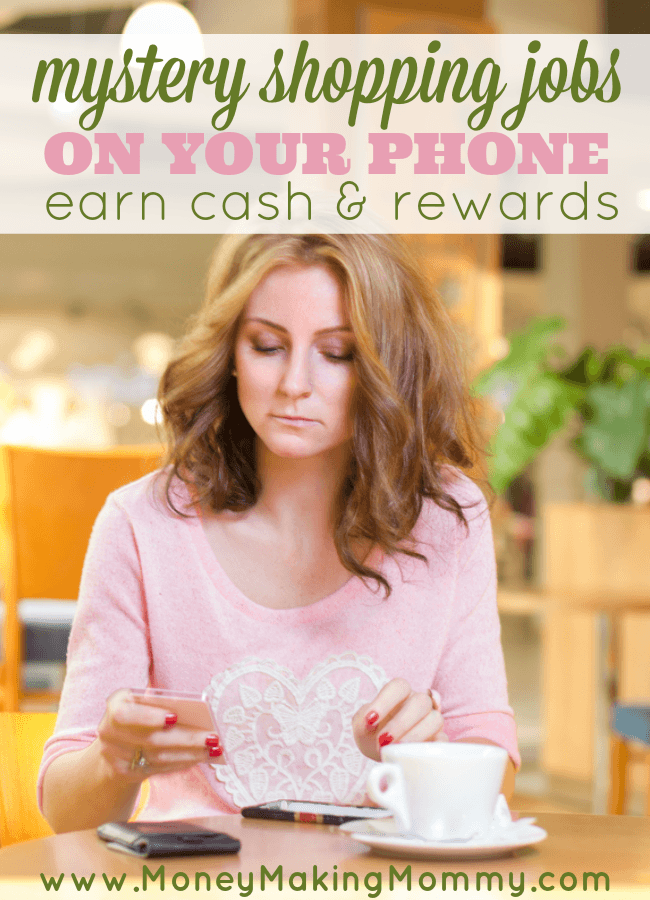 One of the issues with mystery shopping that many have is the time they can take. But on the other side of that, I've read of mystery shopping jobs that will pay over $100 to test drive a car at a dealership. I don't know about you – but two hours at a dealership or less to test drive a car for $100 would be worth it to me. Even with the price of gas to get to the dealership — you figure you'd make $40+ an hour!

1. PaidViewpoint - I've earned over $495! And love the fast payout via Paypal.

4. 1Q - Get paid .25 instantly into PayPal for EVERY text questions you answer!

It's estimated that businesses spend about 1.5 billion on mystery shopping every year. They want to know what we think. Even better… they wanna pay us to tell them our honest opinions.

How To Be a Mobee Mystery Shopper

We all know there are tons of apps out there to help us make money or save money. I'm absolutely addicted to iBotta. I don't go to the grocery store without it. In the short time, I've used it – I've actually cashed in on about $20 a month. That, my friends, is a pizza or a movie for me and hubby. So how does the Mobee App help us make money?

Mobee Has Had Some Staying Power

Mobee has been around for awhile – it's not super new. But I like to let things simmer awhile before I jump in. So many go by the wayside in a short time, that I like to see what happens and it looks like Mobee is going strong. Mobee started up in 2013. And — very cool — it was created by someone that was actually a mystery shopper! I love that part. It's available for both iPhone and Android users. It's free and jiffy quick to download.

Mobee is NOT Just Taking Surveys

Mobee pays us to take surveys (and I know you're rolling eyes here!) — but not JUST surveys, because I know we all get sick of taking surveys. They will also pay you to eat out. So – this may not be a mystery shop at a 5 Star restaurant – but, you could grab a free lunch, sandwich…. salad — and other nom-noms near-by. I will say that some of the mystery shops paid me (which is great- you want that!) — but I had to pay for my own meal?! Basically, it ends of up being a wash. Like I spent $7 and was paid $7. I guess in the end it was free – which is fine by me. I adore Zaxby's salads (or should I say ZALADS) — so hey, for free, I actually love them even more! I've seen mystery shops for McDonalds, Starbucks and Subway as well.

The points you are awarded for doing “Missions”, as Mobee calls them can rack up and be “cashed in”. The way the points work is that 100 points are equal to $1. You can do smaller tasks for around 300 points. And there are some missions that can go for like 1,000 points. And 1,000 points gives you the option to redeem for several cool things. Actually, 500 can be redeemed for great stuff too. (And I want to mention as well — you can use your points to donate to charities too – like Red Cross and Make a Wish!)

As always — it seems those that live in bigger populated areas and big ole honkin cities are gonna by far get more “Missions”. But that doesn't mean smaller cities don't get any. I live in a very tiny town and I put in the zip for the biggest city near me (which is just 10-15 minutes away and where I travel to many times a week anyway) — and cha-ching, the missions started popping up.

They do have a referral program – so yes, please use my referral code (M4JR) if you decide to join, I'd appreciate it. They give you 300 points for using a referral code. Thanks!